Both the defenders have known each other for the past two decades.

Man United defender Harry Maguire struggle for consistency this season and was dropped from the first-team squad by manager Erik Ten Hag.

His England teammate John Stones believes Maguire will find his form in Qatar this year.

The duo have been long-time friends and have paired a robust partnership at the heart of England’s defence.

“First of all, no doubt at all,” Stones replied when asked if Maguire would settle in this World Cup.

“Harry hasn’t played much at his club, but to come in and play like he did – I don’t think anyone saw a bit of rust on him.

“That’s great credit to him and I’m so happy for him and everyone who played. As a player you want and need to be playing and have a good rhythm. But for him to come in to play as he did is credit to him.” 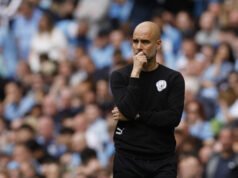 Pep Guardiola has signed a new contract with Man City

Pep Guardiola has signed a new contract with Man City