Manchester City Line Up vs Chelsea

Looking for the lineup today vs Chelsea? Here is the expected Manchester City line up vs Chelsea:

In goal, we can expect Ortega to start with Laporte and Ruben Dias in defence. Sergio Gomez will take the left-back and Rico Lewis will be playing as right-back. The City will want their defence to be strong but currently have limited options.

A three-man midfield with Cole Palmer and Rodri and Phil Foden can be expected.

In the wings, we can expect Bernardo Silva to make a late appearance while Jack Grealish and Riyad Mahrez fill both the opposite flanks. Julian Alvarez is expected to lead the line. 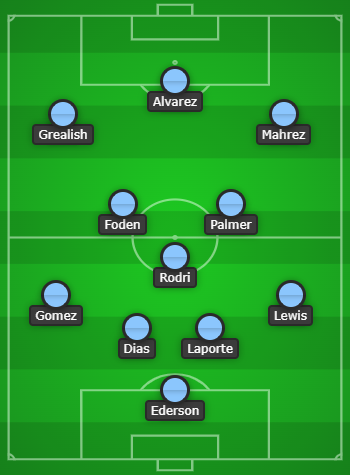 Manchester City takes on Chelsea in the Carabao Cup clash on Wednesday at noon. Man City side takes on Blues at a time when they are struggling in every domestic competition.

City will need to be very dominant if they plan on winning this tie. Potter’s men know how to move the ball around quickly and take advantage of defensive gaps.

Ahead of Wednesday’s clash between City and Chelsea, we look at the matches the two teams have recently played –

Tonight’s match is the 172nd meeting between Manchester City and Chelsea. The Blues have won 71 games while City are following closely behind with 61. The other 39 games ended as draws.

Joao Cancelo will serve his one-match suspension in this cup tie.

As for Chelsea, Ben Chilwell had a serious hamstring injury against Dinamo Zagreb so he will be sidelined for three months.

Reece James and Wesley Fofana are other absentees. N’Golo Kante is also out with a long-term thigh issue.

Kepa Arrizabalaga is already out so Edouard Mendy will start in goal.

Manchester City have been in spectacular form this campaign with the chance of winning the Champions League this season.

The Carabao Cup has been Man City’s bread and butter under Guardiola for several seasons now. They have beaten Chelsea last season at Etihad Stadium.