What will be the Manchester City predicted line up for their clash against Copenhagen?

Predicted Line up vs Copenhagen will be tricky to tell. Pep has shown that he has trust in youngsters but he continues to rotate his squad around in the most unpredictable ways since the new campaign.

Copenhagen would not pose the greatest of threats to a dominant side like City but Guardiola can go with his best line up with all players fit now.

In goal, we can expect Ederson to start with defensive duo Nathan Ake and Ruben Dias in defence. City will want their defence to be strong but currently have limited options.

Joao Cancelo will play his natural position as a right-back. Gomez will be playing as a left-back. Watch & Bet Here =>

A three-man midfield with De Bruyne, Gundogan, and Bernardo can be expected.

In the wings, we can expect Mahrez and Grealish to fill both the opposite flanks. Haaland will be leading the line. 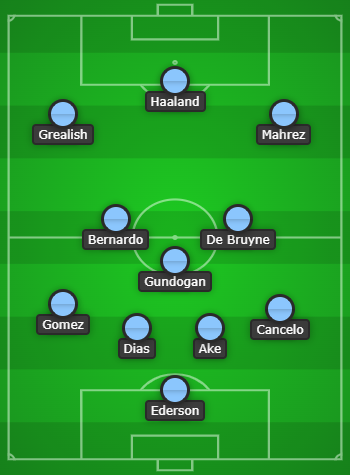 The Cityzens are just one point behind in the domestic league. City’s air of invincibility is still alive and well in the Champions League at least, and this season they are looking to win the title.

Here we will give you an answer to the most frequently asked question about Manchester City – Copenhagen.

Guardiola will be without the services of Kalvin Phillips, John Stones and Kyle Walker with their respective injuries.

Kevin De Bruyne and Phil Foden will make a return to the starting lineup.

As for Copenhagen, Akinkunmi Amoo is sidelined for the rest of the season with a serious knee injury.

Mamoudou Karamoko is set to miss the whole of October with an unspecified issue.

Winger Viktor Claesson is set to retain his place on the right flank, while summer signing Andreas Cornelius is expected to start as the lone striker.