What will be the Manchester City predicted line up for their clash against Dortmund?

Predicted Line up vs Dortmund will be tricky to tell. Pep has shown that he has trust in youngsters but he continues to rotate his squad around in the most unpredictable ways since the new campaign.

Dortmund would not pose the greatest of threats to a dominant side like City but Guardiola can go with his best line up with all players fit now.

A three-man midfield with Ilkay Gundogan and De Bruyne and Rodri can be expected. 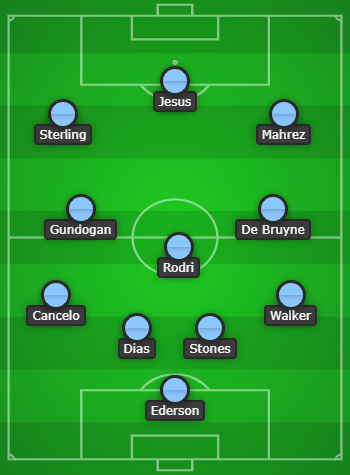 The Cityzens have a two-goal advantage and are flying in the domestic league. City’s air of invincibility is still alive and well in the Champions League at least, and this season they are looking to win the title.

Here we will give you an answer to the most frequently asked question about Manchester City – Dortmund.

Pep Guardiola has a fully fit Manchester City team for this tie. He started all three of John Stones, Kyle Walker and Ruben Dias against Leeds but it is likely that one will be dropped against Dortmund.

Sergio Aguero and Aymeric Laporte will not feature in this second-leg tie due to fresh injuries.

Raheem Sterling, Kevin De Bruyne, Riyad Mahrez and Ilkay Gundogan were all given a rest in the weekend which implies they could start. Kyle Walker and Joao Cancelo could also feature on the flanks over Nathan Ake and Benjamin Mendy.

As for Dortmund, they will be without star winger Jadon Sancho who’s nursing a thigh injury.

Defenders Mateu Morey and Marcel Schmelzer will also be not available for this tie.

Axel Witsel and Dan-Axel Zagadou are unlikely to feature again this season due to Achilles tendon and knee injuries.