What will be the Manchester City predicted line up for their clash against FC Porto?

Predicted Line up vs FC Porto will be tricky to tell. Pep has shown that he has trust in youngsters but he continues to rotate his squad around in the most unpredictable ways since the new campaign.

FC Porto would not pose the greatest of threats to a dominant side like City but Guardiola cannot go with his best lineup, given the number of injuries on his side.

In goal, we can expect Ederson to start with Aymeric Laporte and summer signing Ruben Dias in defence. Nathan Ake will be left out of this Champions League tie. City will want their defence to be strong but currently have limited options.

Oleksandr Zinchenko will play his natural position at right-back. Joao Cancelo will be playing at left-back.

A three-man midfield with Rodri and De Bruyne and Phil Foden can be expected.

In the wings, we can expect Riyad Mahrez to make a late appearance while Raheem Sterling and Bernardo Silva fill both the opposite flanks. Gabriel Jesus is expected to lead the line with Ferran Torres expected to come on in the second half. 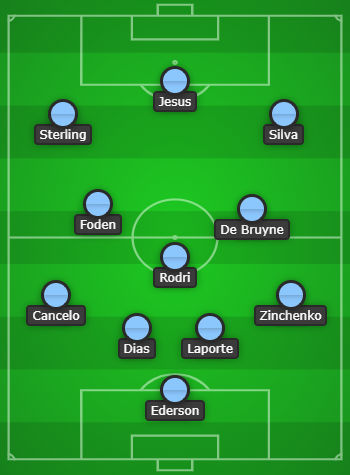 City’s air of invincibility is still alive and well in the Champions League at least and will endeavour to finish in the top spot in their respective group.

The Cityzens have scored 10 and conceded only one goal in four matches in the competition.

As for FC Porto, they are six points clear of Olympiacos and is expected to finish second if Olympiacos fail to take maximum points from their encounter with Marseille..

FC Porto have always managed to reach the Champions League knockout stages and will try to stop Guardiola’s side from winning this week.

Sergio Aguero is likely to miss this fixture after his force to miss out on City’s fixture against Burnley due to a knee injury.

The Cityzens will be without Nathan Ake who suffered a hamstring problem in the international break.

Other than these two players, Pep Guardiola’s squad is not suffering from any major injuries.

As for Porto, Marko Grujic is suspended for this crucial encounter and Mateus Uribe is expected to take his place.

Porto captain Pepe is still nursing a foot problem and will probably miss out this tie.