What will be the Manchester City predicted line up for their clash against Fulham?

Predicted Line up vs Fulham will be tricky to tell. Pep has shown that he has trust in youngsters but he continues to rotate his squad around in the most unpredictable ways since the new campaign.

Fulham would not pose the greatest of threats to a dominant side like City but Guardiola cannot go with his best lineup, given the number of injuries on his side. Watch & Bet Here =>

In goal, we can expect Ederson to start with Dias and Akanji. City will want their defence to be strong but currently have limited options.

John Stones will play his natural position at right-back. Joao Cancelo will be playing at left-back.

In the wings, we can expect Riyad Mahrez to make a late appearance while Jack Grealish and Phil Foden fill both the opposite flanks. Erling Haaland is expected to lead the line with Julian Alvarez expected to come on in the second half. 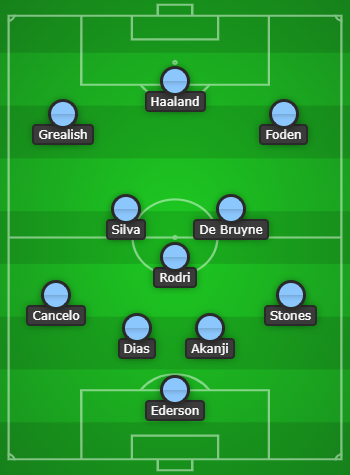 The Cityzens are currently two points behind first-placed Arsenal and aims for some European success this campaign.

As for Fulham, they have been the biggest overachievers by far in the Premier League so far this season.

Ahead of Saturday’s clash between City and Fulham, we look at the matches the two teams have recently played –

Tonight’s match is only the 71st meeting between these two Premier League sides. The Cityzens have dominated with 37 wins while Fulham have managed 17 wins for themselves and the other 16 ended as draws.

Joao Cancelo had an illness issue last time but he will be good to take the start.

Kalvin Phillips and Kyle Walker are both still absent, and Sergio Gomez is available again after a Champions League ban.

As for Fulham, the squad is not suffering from any major injuries and manager Marco Silva will likely play the same XI that featured in the Everton win.

Kenny Tete and Manor Solomon are the only absentees for this match.