What will be the Manchester City predicted line up for their clash against Liverpool?

Predicted Line up vs Liverpool will be tricky to tell. Pep has shown that he has trust in youngsters but he continues to rotate his squad around in the most unpredictable ways since the new campaign.

Liverpool is expected to pose the greatest of threats to a dominant side like City but Guardiola cannot go with his best lineup, given the number of injuries on his side.

In goal, we can expect Ederson to start with new pairings Akanji and Dias in defence. City will want its defence to be strong but currently have limited options.

Cancelo will play his natural position at right-back. Nathan Ake will be playing at left-back.

A two-man midfield with Rodri and Silva be expected with De Bruyne will be ahead.

In the wings, we can expect Foden and Grealish fill both the opposite flanks. Haaland will lead the attack from upfront. 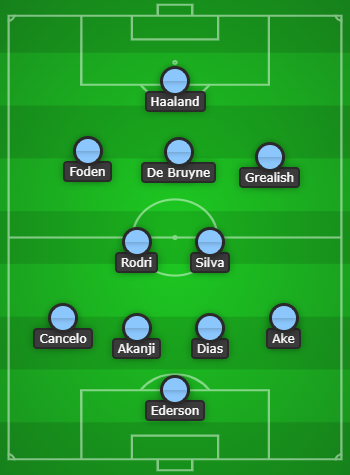 The Cityzens are going through a dominating form in both Premier League and Champions League. They had a decent summer window signing one of the hottest strikers in Europe, Erling Haaland.

City’s air of invincibility is still alive and well in the domestic league at least, but this campaign they will aim to win their first European trophy.

They are expected to lead the Premier League table and this game can be a tough one for Pep Guardiola’s men. We can expect a tired showing since both sides are struggling through injury concerns and back-to-back games. This means the same players could reappear from the last games, fatigued.

See all Manchester City vs Liverpool Head To Head results.

Head to Head – Manchester City Predicted Line Up vs Liverpool

Ahead of Sunday’s clash between City and Liverpool, we look at the matches the two teams have recently played –

Tonight’s match is only the 222nd meeting between these two Premier League sides. The Cityzens have managed 58 wins while Liverpool are up ahead with 107. The other 56 matches ended as draws.