What will be the Manchester City predicted line up for their clash against Norwich City?

Predicted Line up vs Norwich City will be tricky to tell. Pep has shown that he has trust in youngsters but he continues to rotate his squad around in the most unpredictable ways since the new campaign.

Norwich City would not pose the greatest of threats to a dominant side like City but Guardiola can easily go with his best lineup, given the fewer number of injuries on his side. Watch & Bet Here =>

In goal, we can expect Ederson to start with Laporte and Ruben Dias in defence. City will want their defence to be strong but currently have limited options.

A three-man midfield with De Bruyne, Rodri, and Silva can be expected.

In the wings, we can expect Phil Foden to make a late appearance while Mahrez and Grealish fill both the opposite flanks. Gabriel Jesus is expected to lead the line. 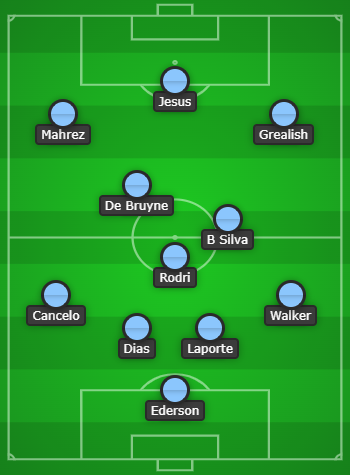 The Cityzens had a dominant season so far in Premier League. They thrashed Norwich 5-0 when they last met at Etihad. They would look to increase the point margin with Liverpool in table standings.

They will be looking to take control of the spot and defend the league title this season.

As for Norwich City, they will be looking to secure a draw against the title-holders.

Ahead of Saturday’s clash between City and Norwich City, we look at the matches the two teams have recently played –

Tonight’s match is only the 72nd meeting between these two Premier League sides. The Cityzens have dominated with 38 wins while Norwich City have managed 10 wins for themselves and the other 23 ended as draws.

Kyle Walker is expected to replace John Stones in the starting lineup after sitting on the bench last time.

Guardiola might rest two of De Bruyne, Rodri or Bernardo Silva ahead of their Champions League fixture.

As for Norwich, Joshua Sargent and Ozan Kabak might be sidelined due to illness.

Lukas Rupp is also doubtful with a thigh problem.

Chelsea loanee Billy Gilmour could be handed his first league start in over a month.