What will be the Manchester City predicted line up for their clash against Olympiakos?

Predicted Line up vs Olympiakos will be tricky to tell. Pep has shown that he has trust in youngsters but he continues to rotate his squad around in the most unpredictable ways since the new campaign.

Olympiakos would not pose the greatest of threats to a dominant side like City but Guardiola cannot go with his best lineup, given the number of injuries on his side.

A three-man midfield with Rodri and De Bruyne and Bernardo Silva can be expected.

In the wings, we can expect Raheem Sterling and Riyad Mahrez fill both the opposite flanks. Gabriel Jesus will be leading the line but Kun Aguero can be called upon in the second-half. 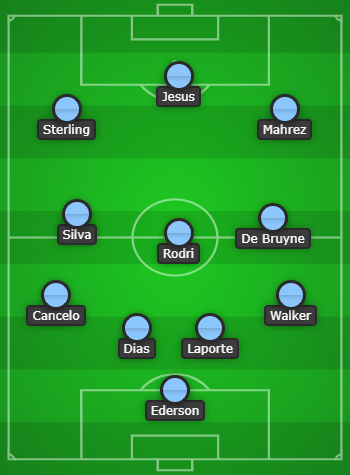 The Cityzens unbeaten winning run of five away games was broken this weekend when they suffered a disappointing 2-0 loss against Tottenham Hotspur. City’s air of invincibility is still alive and well in the Champions League at least, and this season they are looking to win the title.

As for Olympiakos, they have had a topsy turvy season mixed with some good domestic wins. It will be tough for them to get anything out of the match.

The Cityzens will be without Nathan Ake who suffered a hamstring problem in the international break.

Defensive duo Fernandinho and Benjamin Mendy remain sidelined due to injury but Sergio Aguero could make an appearance in the second half following his return from injury.

Gabriel Jesus suffered a calf injury during his time with England but might be back on this crucial fixture.

As for Olympiakos, trio Mady Camara, Ousseynou Ba, and Hillal Soudani could possibly make a comeback after recovering from the coronavirus.