What will be the Manchester City predicted line up for their clash against RB Leipzig?

Predicted Line up vs RB Leipzig will be tricky to tell. Pep has shown that he has trust in youngsters but he continues to rotate his squad around in the most unpredictable ways since the new campaign.

RB Leipzig would not pose the greatest of threats to a dominant side like City but Guardiola can go with his best line up with all players fit now.

In goal, we can expect Ederson to start with Laporte and Ruben Dias in defence. Zinchenko and Joao Cancelo are tipped to feature on the flanks as full-backs.

A three-man midfield with Ilkay Gundogan and Bernardo Silva and Rodri can be expected.

In the wings, we can expect Jack Grealish and Raheem Sterling fill both the opposite flanks. Gabriel Jesus will be leading the line but Phil Foden can be called upon in the second half. 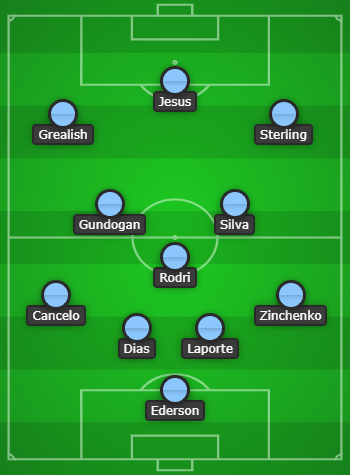 Here we will give you an answer to the most frequently asked question about Manchester City – RB Leipzig.

John Stones, Ferran Torres and Kyle Walker will remain out for this fixture.

Rodri, Ilkay Gundogan, Bernardo Silva and Ederson will be back in their starting roles for the squad.

As for RB Leipzig, they will be without the services of Marcelo Saracchi and Marcel Halstenberg.

Dani Olmo is also ruled out due to his hip problem.