What will be the Manchester City predicted line up for their clash against Sevilla?

Predicted Line up vs Sevilla will be tricky to tell. Pep has shown that he has trust in youngsters but he continues to rotate his squad around in the most unpredictable ways since the new campaign.

Sevilla would not pose the greatest of threats to a dominant side like City but Guardiola can go with his best line up with all players fit now.

In goal, we can expect Ortega to start with defensive duo Nathan Ake and Ruben Dias in defence. City will want their defence to be strong but currently have limited options.

Cancelo will play his natural position at right-back. Gomez will be playing at left-back. Watch & Bet Here =>

A three-man midfield with Bernardo, Gundogan, and Rodri can be expected.

In the wings, we can expect Jack Grealish and Phil Foden to fill both the opposite flanks. Erling Haaland will take rest for this game so Julian Alvarez will lead the line. 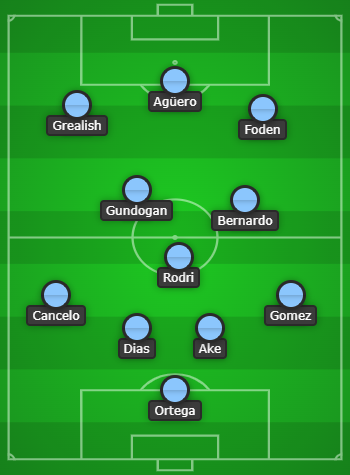 Here we will give you an answer to the most frequently asked question about Manchester City – Sevilla.

Haaland will be sidelined as he recovers from ligament damage.

Cole Palmer, Kyle Walker, and Kalvin Phillips are also out from the home game.

Sergio Gomez is available for selection and could start at left-back after missing the last UCL game against Dortmund due to suspension.

Bernardo Silva could drop into the midfield three, with Mahrez and Foden in contention to return to the first XI.

As for Sevilla, Jesus Corona is recovering from a broken leg and will miss the World Cup.

Tanguy Nianzou (thigh) and Youssef En-Nesyri (hamstring) are also other absentees from the England trip.

Former Man City midfielder Fernando is doubtful with a virus.

Goalkeeper Marko Dmitrovic could keep his place between the sticks ahead of Yassine Bounou.