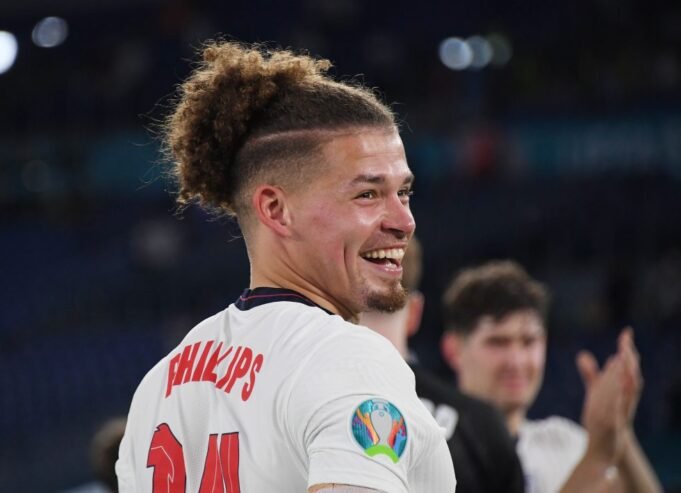 Phillips helped England to reach the final of the Euro Cup 2020.

Manchester City head Pep Guardiola insists Kalvin Phillips is ready for the World Cup, but the midfielder says he is “nervous” about the England squad announcement on Thursday.

After undergoing shoulder surgery two months ago, Phillips returned to the bench for City’s Carabao Cup win at Etihad to Chelsea.

The former Leeds United midfielder had appeared only 13 minutes for the Citizens since joining them in the summer transfer window.

He came off the bench against Chelsea and featured for 40 minutes. He picked up some crucial minutes with Gareth Southgate set to announce his England squad soon.

Phillips played a crucial role for England and helped them to reach the final of the Euro Cup 2020. Southgate would consider him for the mega event.

Despite his lack of minutes this term, many believe the England international will still be called up for the World Cup in Qatar.

The 26-year-old admitted that he is “nervous” for the squad announcement.

“After the first ten minutes on the pitch my heart was racing.

“I was just glad to be back out there after seven weeks of hard work to try and push for the World Cup squad and just be back fit in general.

“It is funny, obviously the operation I had is between eight and 12 weeks and eight weeks is bang on the first game of the World Cup. It was a tough decision but one I am happy I made now.”

Phillips added to Sky Sports: “It’s an amazing feeling [to be back]. It’s been a long time. I’m glad to get back out there and play with the lads.

“Without playing for a while, it’s nervewrecking stepping onto the pitch for one of my first appearances for the club. It felt good.

“[It’s been] difficult. When I first found out I needed the operation everything went out the window. I didn’t feel great about the situation. But after a couple of days I always made sure I worked hard. I was always positive. I’m back fit now so hopefully have a chance.

“A couple of days after the operation my thought was to get back into the club and do as much as I could to get fit. I did more sessions than I would have done to get my fitness back.”

On the World Cup, he said: “Not so much [speaking to] Gareth [Southgate]. I spoke to the staff and physios checking on my progress.

“Anything can happen. I’m optimistic but I know with the amount of game time I’ve had there’s always a doubt.

“I think with my injuries I’ve not been playing 100% because of my shoulder. Now it’s sorted I can get back to what I was before. Hopefully it’ll put me in good stead.”