What will be the Manchester City predicted line up for their clash against Real Madrid?

Predicted Line up vs Real Madrid will be tricky to tell. Pep has shown that he has trust in youngsters but he continues to rotate his squad around in the most unpredictable ways since the new campaign.

Real Madrid would clearly pose the greatest of threats to a dominant side like City but Guardiola can go with his best line up with all players fit now.

A three-man midfield with Ilkay Gundogan and Kevin de Bruyne and Rodri can be expected.

In the wings, we can expect Raheem Sterling and Riyad Mahrez to fill both the opposite flanks. Bernardo Silva will be leading the line but Gabriel Jesus can be called upon in the second half. 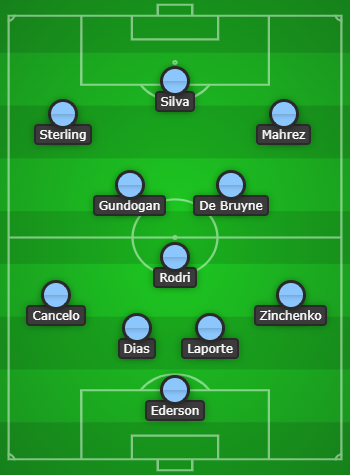 Here we will give you an answer to the most frequently asked question about Manchester City – Real Madrid.

Benzema’s double in Manchester has moved him ahead of Bayern Munich’s Robert Lewandowski at the top of the Champions League scoring lists, bringing his season total to 14.

Eden Hazard, Luka Jovic, and David Alaba are all out due to injury, while Gareth Bale is out owing to a back condition.

Nathan Ake suffered an injury at Elland Road and may be ruled out of this game, while John Stones’ status is unknown.

With Walker’s fitness still being questioned, Oleksandr Zinchenko, a member of Guardiola’s supposedly understrength backline, might be in line for another European start.