What will be the Manchester City predicted line up for their clash against Birmingham?

Predicted Line up vs Birmingham will be tricky to tell. Pep has shown that he has trust in youngsters but he continues to rotate his squad around in the most unpredictable ways. City is no doubt, an excellent side with top players in every position.

Birmingham would not pose the greatest of threats to a dominant side like City but Guardiola can go with his best lineup, given the importance of this tie.

In goal, we can expect Steffen to start with new pairing John Stones and Harwood-Bellis in defence. Ederson has been contracted with the coronavirus and is currently under home quarantine. City will want their defence to be strong but currently have limited options.

Benjamin Mendy might be called on to replace Joao Cancelo at right-back. Kyle Walker at left-back. Mendy is another player who thrives in Pep’s system and might get picked over Oleksander Zinchenko.

A three-man midfield with Kevin De Bruyne and Rodri and Gundogan can be expected. Rodri has been Pep’s jack of all trades this season.

In the wings, we can expect Sterling to make a late appearance while Phil Foden and Riyad Mahrez fill their usual spots. Sergio Aguero should lead the line with Ferran Torres likely to feature in the second-half. 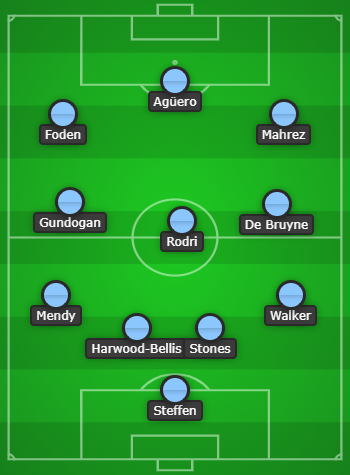 Gundogan and Rodri are expected to continue their midfield partnership.

Sergio Aguero is expected to lead the line with Ferran Torres making a second-half appearance.

As for Birmingham, they have no major injuries in the squad.

Head to Head – Manchester City Predicted Line Up vs Birmingham

Ahead of Sunday’s clash between City and Birmingham, we look at the matches the two teams have recently played –

Tonight’s match is only the 148th meeting between these two English sides. The Cityzens have managed 67 wins while Birmingham are down with 55. The other 24 matches ended as draws.

Manchester City faces Birmingham at Etihad Stadium on Sunday evening. It is expected to be an interesting encounter between the two English sides.

The Cityzens will be hoping to find their goalscoring touch after putting two past Man United in the FA Cup semi-finals.

The Blues have not won a single game in their last five Championship fixtures.

See all Manchester City vs Birmingham Head To Head results.