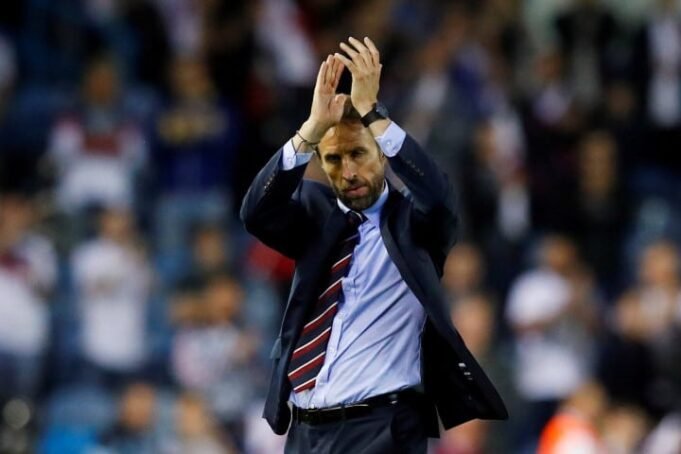 Southgate has been successful using a set-up with three center-backs.

England had a disappointing day out in World Cup 2022 as they failed to grab three points against the USA on Friday night. It was their second group stage and with 4 points, they are still at the top.

Stan Collymore believes Gareth Southgate should return to his tried and trusted system with his Man City stars coming into the first 11.

The English manager has been using a 4-3-3 and although very successful against Iran in England’s opener, the system was a big part of their struggles against the USA as the European side struggled to progress the ball up the pitch.

Southgate has been successful using a set-up with three center-backs, such as a 3-4-3; and former Liverpool star Stan Collymore has suggested in an exclusive interview with CaughtOffside, that the England manager should go back to the tried and trusted system should the Three Lions go through to the knockout stages.

Collymore would like to see Man City stars Jack Grealish, Phil Foden and Kyle Walker brought into the first 11 as they would have a big impact on England’s performances going forward.

Speaking after England’s goalless draw with the USA on Friday night, Collymore said: “Overall, it was a disappointing result for England.”

The former footballer then explained how he would change England’s system and made some suggestions.

“If we qualify for the next stage, Gareth should go for a central defensive three of Walker, Stones and Maguire. One will step out and that starts a fire and enables Rice and Bellingham to move forward and be able to start things – that didn’t happen today,” Collymore said.

“The fullbacks didn’t get forward again because of the system, so that would be rectified with three centre-halves.

“For the Wales game, I would get Kyle Walker in because he needs minutes. I would take Bellingham out for Henderson for a calm head, I would swap out Raheem Sterling for Jack Grealish and Bukayo Saka for Phil Foden – and perhaps Mason Mount.

“I think Gareth will now start to think a little bit more about playing the tried and trusted system with three centre-halves, two wing-backs and the two holders, Rice and Bellingham.”